Written by Christine Lagarde on January 12, 2018 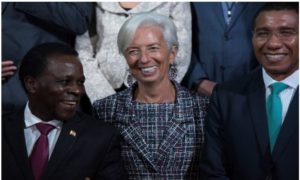 In this article, originally published in the Jamaica Gleaner on November 15, 2017, the IMF’s Managing Director emphasizes the need for Caribbean countries to overcome the challenges arising from domestic imbalances and natural disasters to secure resilient and inclusive growth and reduce inequality. She notes the IMF’s ongoing and evolving partnership in providing economic surveillance, financial support and capacity building.

Caribbean countries enjoyed several decades of strong growth following their transition to political independence in the 1960s, ’70s and early ’80s. Many countries achieved middle- or high-income status, with enviable social indicators and low poverty. Their success was supported by sound institutions and an active policy debate reflecting the aspirations of the Caribbean people.

This picture has, however, changed over time. Since 2000, growth has stalled in many Caribbean countries – challenges have risen from domestic imbalances, largely from high public debt and deep structural problems. Recent events also bear testimony to the vulnerability of the Caribbean to the frequent and severe natural disasters, which have taken a devastating toll. The most recent loss of life and property from hurricanes Irma and Maria is heartbreaking.

Overcoming these challenges will require decisive policy actions. Seems daunting? Yes, but I believe strongly that where there is a will, there is a way. And the good news is that many countries are well on their way.

Achieving macroeconomic stability is a critical foundation for sustained growth. In particular, fiscal consolidation to reduce the public debt burden has become a must for many countries in order to release resources for social and capital spending. Such spending will support long-term growth and reduce poverty.

Still, macroeconomic stability is a necessary, but not sufficient condition for sustained growth; it should be accompanied by ambitious structural reforms that address key bottlenecks to private investment such as reducing red tape and improving the business climate. These reforms hold the key to securing resilient and inclusive growth – and reducing inequality – in the Caribbean.

The IMF has been an important partner in the region. This partnership has taken on many forms – regular ‘health checks’ or economic surveillance, financial support, and capacity building – involving close collaboration with policymakers, civil society, the private sector, and other stakeholders.

Since the global financial crisis in 2008, our capacity-development activities, including through our regional technical assistance center in Barbados, have grown to more than half of the support for the Latin American and Caribbean region. Such assistance has been provided in the areas of tax administration, bank regulation and supervision, and, more recently, correspondent banking issues. In addition, our economic surveillance has expanded to more countries (including Aruba, Curacao and St Maarten); and our lending to the region has reached almost US$4 billion.

The IMF also supports the Caribbean with rapid financing in the face of natural disasters, helping catalyze financial resources from other donors.

Our lending toolkit is designed specifically to provide nimble and swift support in critical situations. Haiti and Dominica are recent examples of countries in the region that have accessed such financing. We stand ready to provide additional support to our member countries who have been hard hit by hurricanes Irma and Maria.

The IMF’s technical and financial support to Jamaica, Grenada, and St Kitts & Nevis are among the most notable recent successes of our partnerships in the region. Strong commitment and broad domestic ownership of reforms, with support from other development partners, has reinforced macroeconomic stability and helped facilitate structural reforms for sustained growth.

Specifically, public debt reduction was a primary goal in all three countries. This was coupled with a blend of structural fiscal reforms (such as overhauling tax incentives, improving public financial management, and advancing public sector efficiency), as well as steps to improve the business climate and competitiveness.

These are difficult reforms, yet the fruits of these efforts are already evident. Public debt in St Kitts & Nevis has undergone an extraordinary reduction (from 147 per cent of GDP in 2011 to 62 per cent in 2017). Economic growth in Grenada has experienced a sharp turnaround (from 0.4 per cent during 2010-13 to 5.8 per cent in 2014-16). Jamaica’s access to international capital markets is at interest rates lower than some larger emerging markets, supported by a primary budget surplus of at least seven per cent of GDP for a fifth year now.

These achievements are testament to the resolve of the people. In Jamaica and Grenada, stakeholders came together from civil society, the private sector, unions, and government to provide public oversight on the State’s commitments. This strong policy commitment and broad ownership by society has defined the economic turnaround – an important lesson for the Caribbean and the rest of the world.

The IMF’s ongoing policy discussions with our Caribbean partners are essential for us to find Source – The Gleaner Company (Media) Limited creative solutions to the region’s economic challenges, often unique to small states. For instance, the IMF is shepherding dialogue among various stakeholders to find solutions for the risks from the withdrawal of correspondent banking relationships. The annual High-Level Caribbean Forum – the sixth edition of which is co-hosted by Jamaica on November 16 – provides a platform for regional leaders to discuss relevant policy issues. I look forward very much to participating with Caribbean leaders and other key stakeholders in the region’s future.