Written by CARICOM Secretariat on March 7, 2018 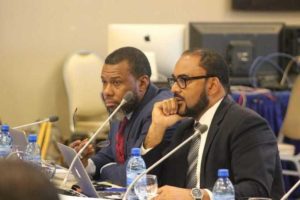 Recognising that implementing building codes is still a significant challenge to the Region’s efforts to build resilience, CARICOM Heads of Government have asked the Caribbean Disaster Emergency Management Agency (CDEMA) to provide recommendations to expedite implementation of the codes.

This request took place at the just concluded 29th Inter-sessional meeting of the Conference of CARICOM Heads of Government, where building a climate-resilient Community was a major issue on the packed agenda. The Conference’s decisions were recorded in the Communique issued following the Meeting, held at the Marriot Port-au-Prince Hotel in Haiti, under the Chairmanship of His Excellency Jovenel Moise, President of Haiti.

A 2016 audit conducted by the Caribbean Disaster Emergency Management Agency (CDEMA) under the Caribbean Disaster Management (CDM) Framework revealed that many homes in the Community were not constructed to withstand the impacts of catastrophic hazards. This concern extended to Critical Infrastructure such as hospitals, morgues, land-fills, connecting bridges, airports and seaports.

During 5-8 September 2017, the Leeward Islands were ravaged by Hurricane Irma, a strong Category 5 Hurricane which battered Barbuda, British Virgin Islands, Anguilla, the Turks and Caicos Islands and the Southern Islands of The Bahamas.

Just over ten days later, Dominica was ravaged by Hurricane Maria, the second Category 5 Hurricane to make landfall in the Region in September 2017, and the third Hurricane, following Jose, within a three-week span during the same month. One hundred percent (100%) of the populations in Dominica, Barbuda and the British Virgin Islands were impacted, and up to 95% damage was recorded to building stock in Dominica and Barbuda and, on average, 75-80% in the British Virgin Islands.

Heads of Government have therefore recognised that natural disasters and climate change pose serious challenges to CARICOM’s sustainable development and have mandated CDEMA to pursue “a comprehensive assessment of the resource requirements to operationalise an effective disaster risk management and mitigation strategy for the Community.”

They highlighted the need for “innovative financing mechanisms” to finance resilient reconstruction, and discussed the recapitalisation for the Caribbean Catastrophe Risk Insurance Facility (CCRIF), noting the proposal to extend the range of risk covered by the Facility.

An important issue within these discussions were the challenges Member States experienced with evacuating nationals during the 2017 hurricane season. This, the Heads of Government noted, highlighted the imperative of articulating a comprehensive regional approach. In that regard, they welcomed the Model Evacuation Policy and Plan which has been endorsed by the CDEMA Council of Ministers.

They highlighted the importance of a “focused implementation” of the Paris Agreement, and urged the coordinated participation of CARICOM Member States in the negotiations to finalise the Paris Agreement Work Programme, taking into account their support of the positions of the Alliance of Small Island States (AOSIS).

Heads of Government urged all countries to ratify the second commitment period of the Kyoto Protocol and the Paris Agreement, as a matter of urgency, in order to support more ambitious climate change action. They also signalled support for regional participation in negotiations throughout the year leading up to COP 24, scheduled for Katowice, Poland from 3-14 December 2018.

The CARICOM Heads of Government also encouraged Member States to take advantage of the strategic opportunities for financing under the Green Climate Fund and other climate financing options through accreditation processes.