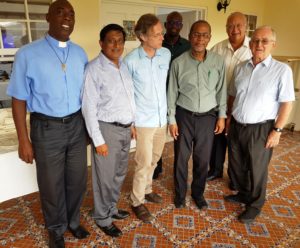 The small island states of the Caribbean have contributed least to the problem of global warming but are the first to suffer its effects, especially the increasing frequency and severity of hurricanes. It is unconscionable that a country such as Dominica should have had to pay an installment of several million dollars in debt repayment to a creditor only days after it was devastated by the passage of hurricane Maria.

With the 2018 hurricane season fast approaching Jubilee Caribbean hosted a meeting of representatives of churches of the independent states of the OECS and Barbados at St. Martin’s Retreat Centre, St. Andrew, on Monday, 5th March, to discuss possible preemptive action and to propose to international bodies, governments and lending agencies the need for a just and structured approach to disaster relief.

Jubilee Caribbean and Jubilee Grenada are part of the global Jubilee movement that promotes the biblical concept of Jubilee (cf. Leviticus 25, Deuteronomy 15, Nehemiah 10 and Luke 4) which includes the periodic cancellation of debt and an end to the cycle of poverty caused by indebtedness.

A Call to the Governments of the Caribbean and the International Financial Institutions ahead of the next hurricane season: establish debt relief as an instrument for emergency support and reconstruction

The 2017 hurricane season has been one of the most devastating in the history of the Caribbean. In the most affected of the Eastern Caribbean islands, Barbuda and Dominica, we have seen lives lost and destruction totalling more than twice the annual GDP.

All research points to the fact that the growing severity of hurricanes in the Caribbean is related to man-made climate change. This means that we in the Caribbean, like some other nations elsewhere in the global south, are least responsible for but most affected by climate change.  The few dozen small Island States across the world, for example, have neither the size nor developmental history to have been major contributors to current climate change.  Yet these small Island States are the most easily devastated by rising seas and harsher storms.  Our brothers and sisters who inhabit these places are in peril, through no fault of their own.

Still, our nations are not only exposed to adverse weather phenomena. Moreover, we are small Island States with small and less diversified economies that have little capacity to withstand external shocks, with which poor but larger nations may be able to cope. This has been one of the reasons that we have never been able to sustainably escape from our debt traps. However, our external debt can be turned into an instrument of efficient support in the event of future catastrophes, if there is a proper mechanism to allow for moratoria and serious debt restructuring.

As Churches in the Caribbean we have witnessed the grief and despair of our people last September, and we are not prepared to enter the next hurricane season without at least being able to tell them that our authorities shall be able to use scarce resources for immediate relief and mid-term reconstruction rather than debt service.

We therefore call upon all those who bear responsibility for responding to any crisis in the next hurricane season and beyond:

Our own heads of State and Government must unite and collectively demand the creation of an efficient debt relief option ahead of the next hurricane season through all available means, including the United Nations System and the Bretton Woods Institutions.

The IMF must use its rule-setting power to endorse a full debt moratorium once a hurricane or any other serious disaster brings destruction beyond a pre-defined level and make sure that a serious debt restructuring of all external commitments shall be possible under due consideration of our peoples’ human rights.

The ECCB and the CDB must act as supporters of a comprehensive debt restructuring process once it is needed.

We as Churches and broader Civil Society in the Caribbean commit ourselves to support our authorities in their efforts towards global justice in every possible way, including through global advocacy with the help of the international community.

Debt relief has been provided before to countries in need, e.g., through the Heavily Indebted Poor Countries Initiative (HIPCI) under WB/IMF leadership or the IMF’s Catastrophe Containment and Relief Trust (CCRT) after the Ebola crisis in West Africa. Through these initiatives, beneficiaries have been given the opportunity of a fresh start and found a way out of their debt traps. There is no reason why our people in the Caribbean, in contrast, should have to slide deeper and deeper into their debt traps after each hurricane season.

We urgently need a tailored Heavily Indebted Caribbean Countries Initiative, which will combine immediate relief and an efficient form of debt restructuring. We do not want to face the next hurricane season without a proper mechanism for relief in place.

SIGNATURES TO THE STATEMENT:

Rev. Joachim Phillip               Pentecostal Pastor representing the Alliance of Evangelical Churches in Grenada & and a member of Jubilee Grenada

Mrs. Valerie Ramoo               Executive Secretary of the Conference of Churches in Grenada

This STATEMENT is also supported and endorsed by the following: