I badly wanted to call the Grenville police station and report a kidnapping today after it became clear that I lost a substantial quantity of monies to two Insurance companies. Very few bandits are more daring and clinical in their approach. My story began over twenty years ago when I started paying premium for vehicles and other properties mandated by laws in Grenada. In school I was taught that Insurance companies were there to minimize my risk, to aid in my legal fees and to indemnify me in the quickest possible time once I am financial and my claim is truthful. Unfortunately I had an accident with a young man in February 2017 who was insured with The Antillean group (Chester John). The usual took place, and to make a long story short, the individual was found guilty and charged by the Court. It became quite apparent that my own insurance company Sun General was unable to compensate me even after one year, because the other insurance was not accepting liability. (2) Sun General informed me that I, as the individual, had to make my own personal appeal to the other Insurance although I paid them over ten years to represent me and (3) They refused to assist my legal fees although boldly on their web site they promise that service to all their clients. Instead I was asked to press on in getting my own lawyer because the Court had ruled in my favour. Since that is the way things are done in Grenada, I proceeded to the Antillean Group’s Chester John building and presented a copy with the ruling of the Court. On my first meeting with their St. Lucian attendant they told me that their client never reported the accident. They needed to ascertain whether he the client, had a valid licence or not. That sounds funny doesn’t it? On my second return, June 18th, I was informed that they did get in contact with their client but their client stated that he was not wrong. I reiterated that there was a court ruling but again the Antillean Group had advised their client to go and seek a redress with the Magistrate. It was the opinion of their client that he was not wrong and he felt cheated since he was not present for the last hearing. Now folks it is abundantly clear that the Antillean group does not want to compensate me. It is also clear that they do not respect the ruling of the Court. So to date, after almost two years I am not compensated by my Insurance company Sun General and the Antillean Group obviously is playing games. Now have you ever heard of bandits, burglars or Soursop thieves giving such foolish excuses?

THE EASTERN CARIBBEAN IS SWAMPED BY A SURGE OF SEAWEED 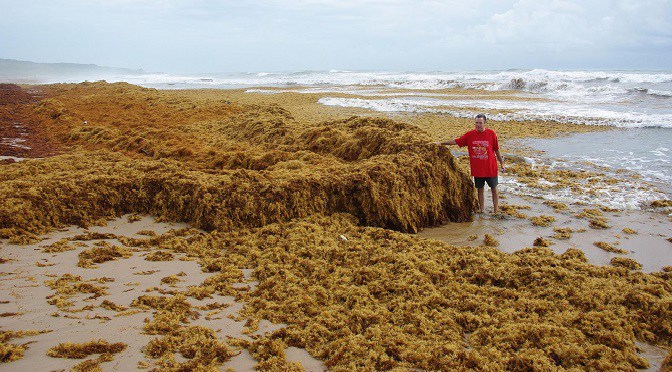