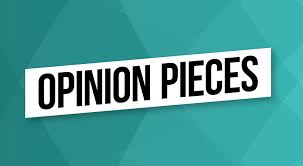 We all agree and are saddened that Scotia Bank sponsored Intercol and the Grenada Co-operative Bank Primary School games along with the almost one hundred individual track and field meets organized by the various schools will not be held in 2019.

The industrial impasse between government and teachers have led to a “work to rule,” impacting on the organizing and staging of all the games.

Minister of Education Emmeline Pierre’s response is that her government will stage a replacement games, ensuring that the students have the opportunity participate in competition.

It’s the wrong approach Minister Pierre! One that puts one side against the other and creates enmity.

The Minister would have been better advised to take a more conciliatory approach, by inviting the Principals Association and the GUT to a meeting specifically to discuss the two premier events for primary and secondary schools.

Also, engaging the athletics association to mediate would have provided a window of opportunity.  If that failed, then the Minister could think otherwise.  But to bluntly discard the teachers is a recipe for further chaos.

As it stands now, the reality is the Teachers Union and Principals Association have a strong united position and I don’t see how the Minister of Education can persuade them to change their minds.

The impression is that the Minister and Government have completely dismissed the teachers demands to return monies deducted from their salaries in November (which is the substantial issue for their work to rule).  And sadly, the Minister’s Press Conference to announce her replacement games has given new life to the GUT struggle.

I cannot see how the Minister of Education and the Government could win that struggle. In fact her bold response, lacking empathy, fuels the confrontation.

That’s not a good tonic for better human relations.  Nor is it to our economic development. Yes, the Minister’s aggression makes her looks strong in the media; but will she earn the respect of the teachers going forward?.

Yes, the government can stage a replacement sport; and I am sure that some children, teachers and spectators will participate; however, I have absolutely no doubt that the quality and the spirit of goodwill will be very minimal.

Solidarity for the teachers is strong, and I predict it will manifest itself in the professional starters and track officials, and even the student athletes not dignifying the government games with their support.

I expect the government to use its money and resources to create hype media coverage but that will only last for the moment. The bigger picture is the future support of teachers in a wide variety of extra curriculum activities. Having being treated with disrespect, the consequences could linger for many years.

Remember teachers not only teach a class between 8 A.M to 3 P.M; they spend time after school contributing to the education and the social upbringing of our boys and girls.

Again it would have been better for the Minister of education to think about the bigger picture than an aggressive response demonstrating strength and power.

The government’s replacement games shall fail because of its political flavour; and equally important, it sends the message that the government does not need the volunteer spirit of teachers and principals.

Remember, West Indies Cricket twice ignored their top players’ protests and went ahead staging test matches with second string teams and the public completely ignored the games. The Ruling NNP might mobilize its supporters to fill the stadium but again it’s a losing battle.

The Secondary and Primary School athletes shall not be staved of competition – they will compete in the Grenada Athletic Association Junior and Senior Championship; from which the Junior CARIFTA Games team is selected.